Bihar: An analysis of Election 2020

The electoral competition in Bihar was intense and a significant number of politicians managed to hold onto their positions.

In Bihar, the Mahagatbandhan and the National Democratic Alliance are the major alliances. Between 2015 and 2020, these two alliances obtained 110 and 125 seats respectively. However, the stability of those numbers hides a lot of volatility, which can be measured by individual candidates’ performance – what we call an incumbency analysis. Here is our analysis of the 2020 Bihar election.

Individual incumbency refers to the ability of a sitting MLA (or MP) to win a consecutive term. We are able to do the coding of individual career paths of candidates to Indian elections through Surf, a software developed at the Trivedi Centre for Political Data.

Most candidates belong to small parties or run as independents and most of these candidates lose and disappear. The only exception is the October election of 2005, held just after the February 2005 election that did not produce a majority.

The first explanation for the successful incumbent is the fact that not all MLAs re-run in the first place. In 2020, 74.5% of all 243 sitting MLAs sought another term, which is a high figure when compared to other North Indian states. This is also a higher figure than in 2015, when only 66.7% of all sitting MLAs re-ran.

Over time, however, slightly more than half of all sitting MLAs have been re-running in Bihar. The number was the highest in the second election of 2005. That year, 92.2% sitting MLAs re-ran. In the following election, it declined to 49.2% and has been on a steady increase since.

Among parties, the Janata Dal (United) re-ran most of its sitting MLAs (56), followed by the Rashtriya Janata Dal, who gave tickets to only 44 of its 80 incumbent MLAs. The Bhartiya Janata Party also re-ran a sizable number of its MLAs (43 out of 73 elected in 2015).

Even as the number of incumbents contesting elections has seen a steady increase since 2010. An average of 50.2% incumbent candidates have been re-elected across assemblies. This number dropped to 37.5% after the Emergency, which was marked by two important swing elections. In 1977, the Congress was lost 110 MLAs in the Bihar state assembly, down from 167 seats. At the same time, the Janata Party swept the election with 214 seats. 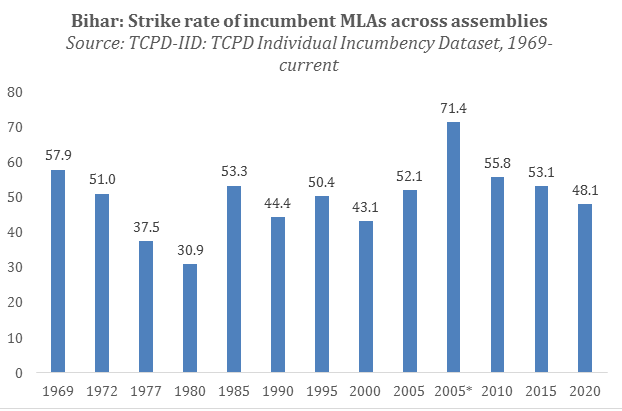 In the following election in 1980, Indira Gandhi’s faction of Congress won 174 seats and replaced the Janata Party. The percentage of successful incumbents in the 1977 election was 37.5%, while in the 1980s election it was 31%. After 1980, the ratio of successful incumbent candidates stabilized around 50%. The only exception, again, was the October 2005 election, which as we mentioned earlier saw a lot of the same candidates re-contesting.

In the 2020 elections, 48% incumbents who contested the elections secured the seat again. From the BJP, 72.1% of incumbents were successful while the figure for the Rashtriya Janata Dal was 52.4%. The lower strike rate of incumbents from the Janata Dal (United) indicates that even their veteran candidates had great difficulties to hold to their seats.

Of these first-time MLAs this time, 34 are from the Rashtriya Janata Dal while the National Democratic Alliance partners, the BJP and the Janata Dal United, have 18 and 16 fresh faces in this assembly. The Congress party has eight new MLAs and the Communist Party of India (Marxist–Leninist) (Liberation) has six. This indicates that MLAs in Bihar are better anchored to their constituencies than in other states. This points towards the importance of local factors in getting candidates elected.

The longitudinal data shows that over time, it pays off less and less to switch party affiliation, as most of them end up losing. After 2005, less than one turncoat out of five succeeded to get elected.

Through this data we can say that Bihar is a state where electoral competition for candidates is intense but also that a significant number of politicians manage to hold onto their position as well. This indicates that local factors of dominance remain salient and important in politics, and that the identity of candidates matters, alongside party appeal. In most seats however, voters still get to decide who will represent them for the next five years.